Join us for a lec-mo from artist and science educator, Lin McJunkin. Topics include 7 steps of scientific and artistic inquiry and how to artistically illustrate those steps for environmental topics (e.g. climate change). Lin’s demo will be of glass techniques used in her work including large-scale pâte de verre, narrative kiln-carving, and open-mold casting.

Lin McJunkin utilizes the heat of her environmental commitment, as well as the heat of her glass kilns and metal torches, to sculpt glass and metal into work that celebrates and advocates for the health of our planet and its inhabitants.  Lin currently works in three distinct styles:  a contemporary version of an ancient Roman glass casting technique known as “pate de verre ” (glass paste); an embossing method known as “kiln-carving;” and “glass casting” into metal cut-outs.  When nothing else will convey her chosen concept, she resorts to “mixed media” to convey her ideas.  A true West Coast artist, Lin McJunkin has studios in Oakland, California, and Corvallis, Oregon, in addition to her main studio just north of Seattle, WA.

See her full resume, accomplishments, and online gallery at mcjunkinglass.com 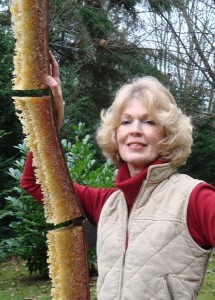 Like many glass artists, my interest in glass grew out of early experiments with ceramics.  Many of my glass pieces begin as clay forms pressed into the sand, plaster or metal  molds I began using while working at Pilchuck International Glass School.   ln my studio north of Seattle, I utilize the heat of my commitment, as well as that of my kilns and torches, to transform recycled glass and metal into sculptural elements for private and public commissions.

Heat is not only an essential tool in forming my work, but it’s also the focusing concept of my recent work about global warming.  Because of my parallel career as a science educator, I feel compelled to advocate for the health of our planet and its inhabitants in artwork that is both visually and intellectually captivating.

Besides heat, light is another element that animates my work.  It careens off the sharp, flint-knapped edges of thick glass plate or meanders through the labyrinth of shattered tempered glass.  Light that is absorbed or reflected by chips of colored glass and vitreous enamel powders and paints also enlivens my pieces.

For over 30 years, I have collaborated with architects and designers to translate my own and my clients’ ideas into elegant glass panels, mostly for private settings.  Now I also create larger glass and metal sculptural elements, often in consultation with art commissions and engineers, to foster environmental awareness, inspire concern, and encourage positive behaviors in a broader audience.

My work has been exhibited on both coasts, and is held in numerous private and public collections, including homes, businesses, churches and hospitals in the US, Canada, Europe, South Africa and China.