Prerequisites: This is an Intermediate/Advanced course. Students should have prior hot shop experience including gathering hot glass, creating objects, and assisting others in a hot glass studio.

Growing up in Pennsylvania, Mark Leputa always found great pride and satisfaction in creating with his hands. As a University of Pittsburgh graduate, Mark felt his imagination burning within. In 2004, during a backpacking trip to New Zealand, Mark finally found his artistic passion when he discovered the medium of glass.

The heat, fire, and seemingly liquid state of the material entranced him. The short New Zealand holiday turned into a three-year apprenticeship as he began to develop a body of work where simplicity, purity of form, and negative space merge. This period (2004-2007) marked a turning point, leading him towards a career as a professional artist.

Returning to the United States, Mark began working for Orbix Hot Glass, assisting owner and mentor Cal Breed (Alabama, 2007-2020). This period was an opportunity to hone his craft, allowing for tremendous artistic growth. Seeking further knowledge, Leputa would make the pilgrimage to the major glass schools, including the Pilchuck Glass School – where as fate would have it, he met his future wife Melanie Long (2010).

As an emerging artist, Leputa was twice awarded the Alabama State Council of the Arts Fellowship Grant (2012 and 2019), exhibited at the prestigious SOFA International Expo (2008 and 2009), and represented Alabama as a NICHE Award finalist (2010). His exposure reached worldwide audiences. His International level work has been showcased at numerous art shows in Europe, as well as two solo exhibitions; ‘Look-
ing Glass Self’ (2013 – Vught, Netherlands) and ‘Carving at a Glacial Pace’ (2016 – Rotterdam, Nether-
lands).

In 2017, Leputa showcased a retrospective/revisit of artworks developed during the decade of his Alabama residence with his solo museum exhibition ‘Full Circle: A Decade in the Deep South’ (Wiregrass Museum of Art – Dothan, Alabama). Immediately afterwards he completed work for a duo exhibition titled ‘Reveal(ations)’ with San Francisco based glass artist David Patchen, which included both solo and collaborative works between both artists.

In 2021, Mark held his fourth solo exhibition ‘Beyond the Temporal’ at the Duncan McClellan Gallery (Saint Petersburg, Florida) where he was also invited as an Artist in Residence alongside longtime friend Steve Hagan. Immediately after the conclusion of the residency, Mark and Steve road tripped to Tucson, Arizona to visit the Sonoran Glass School. After over a year of searching, they found the perfect location for their private studio, and on November 1, 2021 they would receive keys to what is now High Priority Studio – Tucson, Arizona.

Now a professional artist in his own right, Leputa has travelled to teach workshops while continuing to exhibit the art he has become recognized for. He works alongside Steve Hagan at their own High Priority Studio, as well as being a part of the Sonoran Glass School and Tucson glass community. Being his own harshest critic, Mark seeks precision and close attention to detail. With intense focus, his creative approach is relentless and uncompromising. All stress fades away. Every touch to the glass has significant and deliberate meaning. Each title chosen to bond the physical piece with its emotionally driven design. 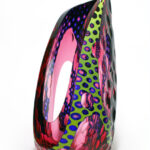