This workshop will introduce students to the liberating method of creating glass beads and sculptures without the use of clay coated mandrels. Have you ever been working on a glass pieces off clay coated mandrels and the bead releases at a premature time? Avoid this waste of time and supplies with his new approach.

We will explore stringer work and feathering of surface manipulating, clear casing and twisted canes, using Effetre and all while handling tungsten mandrels in three different sizes. The bead is made on the tungsten and then when its done, removed from the mandrel while hot and put into the kiln.

CLASS NOTES
There is a $15 material fee due the first day of class. 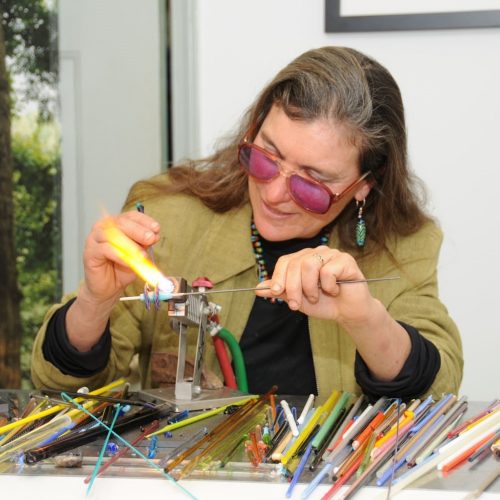 Sage was born in Independence Mo. on Independence Day, then was raised in Southern California in the 60’s where she learned a love for beads and beadwork, along with getting a little to much sun! She then moved to Bellingham, Washington and gave birth to her son, Beau Anderson Sage. Over the years she tended towards the Arts , working in Surface designs and Textiles, Pen and Inks and Water colours , Woodworking and Floral Design . In the late 1980’s she found a way to learn Hot Glass through her time with Brian KerkØiet of Gossamer Glass, she focused on Beadmaking when she set up her own studio in Bellingham in 1988. Over the years she has been a wellspring of contributions to the renaissance of the American Glass bead Movement , with awards in shows and exhibits as well as a long list of published articles in Ornament Magazine , Lapidary Journal, Bead and Button and various major papers. She met Tom Holland at The International Bead Conference in Washington D.C. and eventually decided to join forces in Arkansas.Sage has been one of the longest running contemporary glass Bead,makers in the country giving demonstrations and presentations to the International Society of Glass Bead Makers (ISGB) Gatherings since its inception in 1993.Most recently she has taught The Masters Class at The Bead and Button Show along with Beau Anderson. Sage was the guest of Honour at The Musee De la Verre , Sar’s Poteries journey de La Perles in Northern France in 2013. Then in 2014 Sage gave a presentation in Houston TX at The Gathering of The International Society of Glass Bead Makers.