Glass Forged by Extra-Terrestrial Forces
Forty-million years after the fall of the dinosaurs—but twenty-six million years before the rise of humanity—a meteorite exploded over the Sahara. The explosion was so fierce and hot that it turned sand to glass in an area stretching for nearly 150 square miles. In the ensuing eons, harsh winds turned much of the glass to dust, but a few remnants of this cosmically-forged glass remain in the world today. They are known simply as Libyan Desert glass.

Layered Glass Loaf Portraits
Loren Stump is a self-taught glass artist who has managed to create unique glass “loaves” that, when sliced, reveal stunning portraits. Using thousands of colored glass canes, he “paints” layer by layer, expertly fusing the glass together. Loren can’t check his work as he is creating the murrine; the portrait can only be viewed once it is completed and sliced. Most murine consist of just patterns and shapes; few artists are able to make full portraits. Each slice of this glass “loaf” costs $5,000. 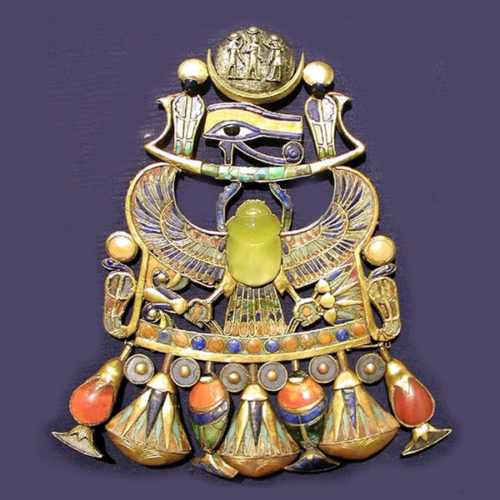 King Tut’s Meteor Glass Scarab
In 1922, a mysterious scarab was among the findings in King Tut’s tomb. Geologists easily identified it as glass but couldn’t explain how it had formed over 28 million years before the birth of Tut. Now we know that the glass was the result of a meteor exploding over the Saharan Desert. The astral debris flash-heated the desert to temperatures over 3,600 degrees Farenheit, creating small fragments of glass across 2,300 square miles of desert. The glass was likely found by a tradesman and, through a process called knapping, was shaped into the yellow cosmic scarab adorning Tut’s brooch.

Petrified Lightning
When a lightning bolt hits the ground, it is hotter than the sun. So hot that it can melt and fuse sand, silica, and some soils. Petrified Lightning or Fulgurite is exactly that: glass made by lighting. Fulgurite left behind by lightning is a veiny, organic looking artifact made of sand that’s been superheated and then quickly cooled. A hollow tube in most cases, the inside is similar to glass as a result of its cooling so rapidly. 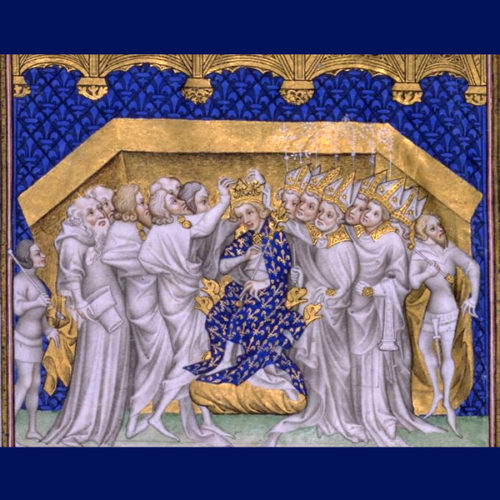 Sacré Bleu!
King Charles VI of France suffered from a delusion that caused him to believe he was made of glass.

Super Ball
A solid glass ball will bounce higher than a rubber ball of the same size. 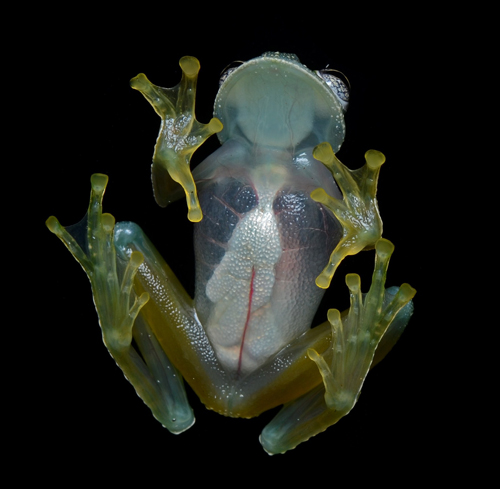 The Glass Frog
A Glass Frog has completely clear skin that allows you see all of its internal organs.

Longest Glass-Bottomed Bridge
The longest glass-bottomed bridge is the 1,601 foot Red Cliff Valley Glass Suspension Bridge, opened in 2017 in Hebei Province, China. Made of 1,077 panels of 1.5 inch glass, and supported by cables that weigh over 120 tons, the bridge is designed to take the weight of 2,000 people (although no more than 600 tourists are allowed to cross at any one time). Visitors crossing the bridge are asked to wear “shoe gloves” to protect the glass surface.

Largest Glass Sculpture
The largest glass sculpture measures 29 feet, 6 inches by 65 feet, 7 inches and was created by Dale Chihuly at the Bellagio Hotel in Las Vegas, Nevada, on 15 October 1998.

Largest Cartoons for Stained Glass
The Gouda cartoons, the original sixteenth- and seventeenth-century designs for the 72 stained-glass windows of the Sint-Janskerk, Gouda, Netherlands, consist of 469 cartoons measuring a total length of 5,652 feet, 10.51 inches. 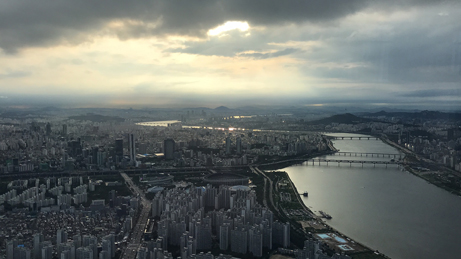 Highest Glass-Floor Observation Deck
The highest glass-floor observation deck is the Sky Deck which is 1,568 feet, 2.8 inches high in the Lotte World Tower, Seoul, South Korea. The 1.7 inch-thick glass makes up the floor, which is capable of supporting over 1,100 pounds per square meter.

Most Glass Broken by One Finger
The most pieces of glass broken by flicking one finger in one minute is 32, achieved by Zhang Guowu, on the set of Zheng Da Zong Yi, in China.

Largest Bead Sculpture
Liza Lou of Topanga, California, used 40 million glass beads to create a kitchen and garden which was first displayed at the Kemper Museum of Contemporary Art in Kansas If the beads were strung out, they would stretch approximately 380 miles or the distance between Los Angeles and San Francisco.

Most Durable Digital Storage Medium
The most durable digital storage medium is a nanostructured glass disc which has an estimated lifetime of 300 quintillion years at room temperature, and a capacity of 360 terabytes.

Visible from Space
Coca-Cola celebrated its 100th anniversary in 1986 by constructing the world’s largest logo. Built using 70,000 of its glass bottles, the giant sculpture measures 50 meters tall by 120 meters wide, and is so vast in scale it can only be viewed in its entirety from the sky and is visible from space. The sculpture is located in northern Chile in the desert near Arica.

First Recorded English Patent
The earliest of all known English patents was granted by Henry VI in 1449 to Flemish-born John of Utynam for making colored glass for the windows of Eton College.

Largest Christmas Candle Ornament
An ornamental candle measuring 12 feet, 9 inches tall and 10 feet, 2 inches wide was constructed by Sergio Rodriguez Villarreal from 1,789 pieces of flat glass mirrors and 1,164 bottles. It was displayed in Mexico in 1997.

Glass Recycling Record
In 2016, The Chinese University of Hong Kong smashed the record for the most glass bottles recycled in one hour. Students, alumni, and local residents participated in the collection of the glass bottles which weighed 2,528 pounds, 11 ounces. The glass bottles were recycled into green bricks by a local construction materials company.

The Pane of Glass
The first recorded glass window was most likely produced by the Roman Egyptians in about 100 A.D. Before they could be mass-produced, the panes were made of different materials ranging from paper and cloth to animal hide. Some window panes were even made of thin slices of marble.

Pricey View
Glass panes on windows and doors were considered a luxury during the 1600s. Only the exceedingly wealthy had them, and they were so rare that people even took down the windows when they weren’t in use.

Reflecting on Mirrors
The history of mirrors dates back to ancient times when mankind first saw reflections in a pond or river and considered it magic. Polished stone or metal was used in the first early man-made mirrors. Later, glass was used in combination with metals like tin, mercury, and lead. Today, the combining of glass and metal is still the formula used in almost all modern mirrors. Mirrors made by coating flat glass with silver or gold foil dates from Roman times and the inventor is unknown.

Earliest Glass
The earliest known man-made glass is in the form of Egyptian beads from between 2750 and 2625 B.C. Artisans made these beads by winding a thin string of molten glass around a removable clay core, resulting in a glass that was opaque and very precious.

Fake News: Glass Edition
Though the Phoenicians are traditionally credited with discovering how to make glass, it is unlikely. According to Pliny the Elder, some Phoenician merchants were on a beach and built a fire using blocks of natron from their cargo; with the heat of the fire fusing the sand, natron, and burning wood to produce glass. This is not a plausible story as a beach fire would not be hot enough to produce glass.

Super Cool!
Atoms and molecules move around freely in liquid molten glass. As the glass cools, the atoms do not form a crystalline structure as in most other materials. The glass stays flexible and can be manipulated by blowing a bubble into it or pulling it around to make various shapes.

First Glass in the U.S.
Glassmaking in the United States started with the arrival of eight settlers to Jamestown, Virginia. They used local materials: sand from the James River, potash from the forest, and oyster shells which could be burned and ground to make lime. The glass factory at Jamestown was believed to be the first manufactory in the US, producing the first batches of goods to be exported to England from the New World.

Stone Age Design
Glass is formed whenever natural events involving super high temperatures—volcanic activity, lightning strikes, or the impact of meteorites—cause certain types of rock to melt, fuse, and then cool rapidly. Fossil evidence shows that Stone Age humans used this natural glass as far back as 9,000 years ago to make tools such as spearheads and cutting instruments.

Phoenician Hot Shop
Around 30 B.C., craftsmen in Phoenicia discovered that glass would inflate and take shape if they blew through a hollow metal tube into a lump of molten glass.

Venetian Heat
By 1291, there were so many Venetian glassmakers that their furnaces were causing fires all over the city. This prompted the city council to move them all to the nearby island of Murano.

Glass Not What It Seems
Some scientists think that if you wait long enough, perhaps billions of years, all glass will eventually crystallize into a true solid. In other words, glass is not in an equilibrium state, although it appears that way to us during our limited lifetimes.

Flying High
Scientists have made a breakthrough discovery about the bizarre properties of glass, which behaves at times like both a solid and a liquid. Their finding could lead to aircraft that look like Wonder Woman’s plane, with wings of glass or something called metallic glass.

Addicted to Glass
A lawyer from India has been eating glass for the last 40 to 45 years. He told the media, “It is an addiction for me. I wouldn’t suggest others follow as it’s dangerous for health. I have reduced eating it now.”

Voodoo Glass
In Haiti, the Voodoo Day of the Dead Festival is for remembering relatives who have passed away and asking spirits for favors or advice. For its devotees, one ritual is the eating of glass.

Glass Beach 1
For years, Russia’s Ussuri Bay was a dumping ground for glass bottles and waste from a nearby porcelain factory. But today Steklyashka Beach is a stunning tourist attraction. Years of erosion have rounded and polished the discarded pieces of glass and porcelain into beautiful pebbles of various colors and have turned this place into a wonderland.

Glass Beach 2
No more than a garbage dump between 1950 and 1967, California’s Glass Beach is now quite a tourist attraction. The elements did their job, transforming glass shards into colorful jewels that people spend hours collecting.

Mysterious Glass Orbs
Vitreous orbs have presented scientists with evidence of a massive meteorite impact around 800,000 years ago. They believe that molten debris rained down over an enormous area stretching from Australia to Vietnam, creating glassy globs which contain very few fluid vesicles or mineral inclusions, implying a very hot impact. The orbs—known as microtektites—come in a variety of shapes and sizes and typically range from a few millimeters across to a centimeter.