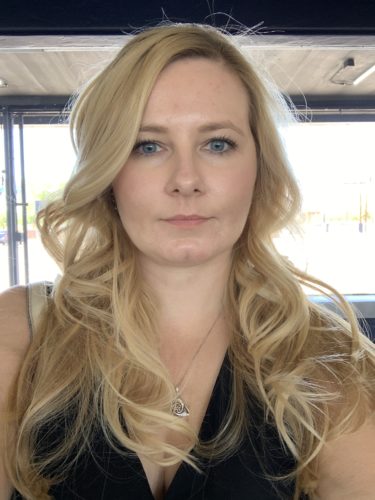 Monique started doing stained glass around 2003. She was living in England and the Arts and Crafts Center where she worked offered a class. After taking the class she fell in love with stained glass and became the teacher’s assistant. Monique took a break from stained glass for a few years so she could focus on school and getting her degree, but she got back to it as soon as she could.

What Monique loves about working with glass is the how it can be both methodical and unpredictable. She explains that glass doesn’t always break the way you want and it can be challenging. Monique is quick to add that usually, as long as you follow the steps, you’ll end up with a great piece. One aspect of glass that she loves is how it filters light and changes the environment around you.

When asked why she started teaching, Monique exclaims that she loves it! She loves getting people excited about a new skill and craft. She also loves seeing people’s ‘a-ha’ moments when they’ve worked out a solution to a challenging part of their project. Stained glass has been around for a long time, but its popularity ebbs and flows, so Monique enjoys being able to pass on its history and tradition.

Monique says, “Teaching stained glass at SGS has been wonderful because of the creative collaboration available. It’s so nice to be able to get a second or third opinion if you’re thinking twice about something.

“Working in a creative space like SGS is very inspirational and exciting.

“Being around other forms of glass artistry at SGS is very intriguing and motivates people to try new things or even combine different forms together.” She explains that you can add things like rondelles from the Hot Shop or fused pieces from the Warm Shop into your stained glass piece.

“Things I love about stained glass are if you learn the steps then you can do it! The glass community is also full of wonderful people who love to share ideas, tricks, and patterns. So even if you don’t consider yourself a creative person and you don’t feel confident in creating your own patterns, usually there are a bunch of free ones on the internet. One fun thing about stained glass people sometimes don’t realize, is that if something doesn’t melt, like bolts or seashells, then most of the time you can solder it into your panel.”

David Pashkow, President of the Sonoran Glass School Board of Directors, says he was always doing something creative when he lived in the Chicago area. Before moving to Arizona, he spent 60 years split between the northern suburb of Highland Park and downtown Chicago. He always lived within walking distance of Lake Michigan before moving to the desert Southwest.

Through the years his creative outlets included ceramics, silver jewelry and lapidary. Like a lot of creative people that move, David left behind a network of friends, fellow artists and sometimes, like in his case, a large home studio where he indulged his creativity.

Once in Arizona David looked for things to do. He saw an ad for Sonoran Glass School and decided to check it out. He started by taking glassblowing classes and instantly fell in love with Hot Shop work. That was in 2008, twelve years ago.

When asked what it is about glass art that appeals to him, in typical David fashion he replied, “The thought of working with a material that resembles volcanic lava was exciting.”

A love of the arts, and of glassblowing doesn’t necessarily mean a willingness to commit to serving on the Board of Directors. But David felt that SGS was a hidden gem. He used to call it “The Little Tin Shack at the end of 18th Street.” He saw beyond the little tin shack to all the possibilities that SGS held. He hoped with his business experience he could bring something more to the table. So, when a position on the Board was offered, he readily accepted.

David has been closely involved with SGS for 12 years. He’s seen the school weather many changes. The changes that stand out most to him is the fact that SGS, although not yet a big player, has become part of the Tucson Arts Community. He’s also seen how the school has become a destination with visitors from out of town for Make-Your-Own Experiences.

If you start at a glass school by taking classes and end up as the Board President, it’s safe to assume you’ve had some rewarding experiences. For David those include working with Executive Director, Lynn Davis, who David says, has raised SGS to be highly respected in the arts community. He says it’s also been rewarding to watch the “fabulous” staff in three shops demonstrate, teach, and create glass art.

“Seeing the joy on people’s faces when they pick up something they’ve made out of glass is very rewarding.”

With rewarding experiences comes challenging ones as well. The temporary closure of the school to the public due to Covid-19 has presented serious challenges. But, to David, the challenge that has been most enduring is securing large donors. That is why SGS values and needs the ongoing support of everyone that walks through the door.

What is David’s hope and vision for Sonoran Glass School’s future? He hopes that SGS will always be an integral part of the Tucson Arts community. With his time and enduring effort David has moved SGS closer to that goal.

According to Shannon Lynch, “It’s like a core value, having pretty things around you.”

Growing up, Shannon’s family made regular trips to art museums. Her mother was a painter and sculptor, so art and creative expression were highly valued by the family. As a middle school principle, Shannon put her appreciation of art to work. She was aware that a lot of famous authors and artists, like Leonardo da Vinci, were scientists. Shannon explained, “So much of art is about balance and numbers and observation skills. It doesn’t matter what medium you’re in.” She shared her appreciation of art with students by taking them to art museums.

When Shannon retired and settled in Green Valley, she enjoyed the arts center in her community. The center closed during summer when snowbirds flew back home. Shannon worked with administrative staff to keep it open year-round. Staff eventually denied the option of keeping it open during summer and suggested she look elsewhere for classes. She checked out two places but they were pretty ‘cookie cutter.’ That didn’t interest Shannon.

Shannon found SGS through the glassblowing offer on Groupon. She came, got a feel for the school, and never left.

“The school is very welcoming and the Tuesday group in the Warm Shop is super welcoming. If you go to Virgil with an idea or a project, he’ll work it out and help you determine what the end result will be.” Shannon enjoys the fellowship of the Tuesday group. “We’re all so different. But the regulars come for friendship, support and encouragement. It’s not limited to glass projects. It extends to family matters, health issues, whatever someone needs. Glass working has gone beyond fusing glass together.”

Shannon first got interested in glass when she lived in the Pacific Northwest. There was a man who lived in a blue and orange house. He had decorative bird cages and miscellany in his yard. “It was funky,” Shannon says. He made buttons, pendants (Shannon also called them donuts and lifesavers) from dichroic glass. At that time, what this man was doing wasn’t conventional. Shannon spent a few days working with him. But Shannon moved away and for 25 years she searched for a way to make the same items but couldn’t find the tools or resources needed.

When Shannon came to SGS, Laurie Schock was offering a class in dichroic glass. Laurie pulled out a slab of dichro and Shannon went to work trying to make what this man had made many years prior.  While Shannon was making this slab everyone else in the class was working on little pieces of pretty jewelry. Laurie had the tools and resources and together they got something that was fairly close.

Shannon has enjoyed photography and watercolors, but it was a fascination with dichroic glass that started her down a glass art path. “It was just so captivating, the colors and the sparkle and the three-dimensional aspect of it.

“I enjoy the school because you can kind of write your own ticket here. The staff really is dedicated to people that want to explore their creative side, whether it is a one-time flower or a bowl or a piece of jewelry. The staff is just so welcoming and open to anything you want to do.

“If I couldn’t come to SGS it would be devastating. It really would. It’s just a tremendous resource. I would have to try, I think, and continue to create. You need a venue to meet people who are creators too. Some people try to make something and if they’re unhappy with the end result they just go and buy one. The group I work with at SGS are like-minded in the sense that we make things because we really enjoy the process. Anytime you ask someone what they plan to do with their finished piece they say, ‘I don’t know. I haven’t figured that out yet.’ It’s the type of group that whether they have something they’re working on or are starting something new, they’re here on a regular basis simply enjoying the process.

“I could still create if I couldn’t come to SGS. I would probably get more done! But the friendships and relationships that have been built here are pretty irreplaceable.”