Join us in welcoming Freddy Faerron for discussion of his work and a slideshow presentation by the artist.

Light refreshments will be provided. 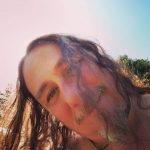 Freddy Faerron has been a professional craft artisan for over twenty five years. His career has encompassed various media including leather, metal, plate glass and lampworked glass. He has traveled throughout the U.S. selling his art in open-air markets, craft fairs and retail stores. His jewelry was showcased on the national TV series “Dharma and Greg,” and worn in concert by Emily Saliers of the Indigo Girls.

Working as a stained glass assembler in the mid 1990s, he fell in love with glass in general. He learned to cut, foil and assemble custom stained glass panels from artists Bill and Irene Powell of Miami, Florida, and has continued his growth in glass art ever since.

He began working with borosilicate glass as a lampworker in the late 90s. For the past 17 years he has developed jewelry, marbles and large-scale borosilicate drinking vessels, as well as solid and hollow sculptures. He feels he is just now beginning his dialog with lampworking and believes he has established a comprehensive vocabulary to create a body of work.