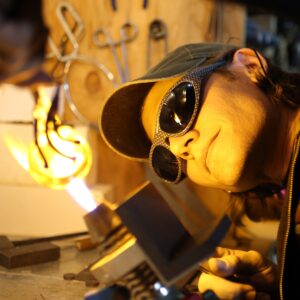 John has been a full time glass worker since 2003.  He first worked in the sign industry bending glass and making neon signs. In 2010 John quit his neon job and started his own art glass business titled Glass Phoenix. His work can now be found in galleries and stores all across the country. John spends most of his time working as a full time glass artist, but is also currently working on his second book, and has recently helped to develop the organization Artist for a Cause AZ.

John Ryszka II, a native of Michigan City, Indiana and was first introduced to glass working while attending Vincennes University in Southern Indiana. He was studying graphic art and design and ran into a scheduling problem one semester that changed his life. The class he wanted was full so his guidance counsellor recommended taking a course titled Scientific and Decorative Glassblowing.  At first, John was reluctant to sign up, but the counsellor was convincing.  John immediately took to working with glass and felt a natural affinity for the medium.  As fate would have it, there was an exhibit in the university art gallery at that time that would greatly influence John as well.  An artist had created sculptures that included glass neon tubes.  The gallery lights were continually shut off, and only the dimly shinning light of the neon sculptures illuminated the space.  John couldn’t stay away from the gallery, and would make detours to his schedule just to catch a few more glimpses of the moody and aura-invoking art. This exhibit, together with the scientific glass blowing class, had such an impact on him that he decided to study neon instead of graphic art and design.

John then enrolled in the National Neon Institute in Benicia, CA.  This is where the love of glass truly took a hold of his life.  In Benicia, he immersed himself in glass.  He studied neon and lampworking, started fusing glass, and frequently visited the local glass blowing studios to watch and to learn.  After neon school John moved to Phoenix, AZ to work for commercial neon sign shop called Neon Nightscapes, where he would spend the next eight years.  When John arrived the owner of the company, John Perry, had a dream of opening a glass school and was looking for a building. Within two years John Ryszka II was helping in the development of programs at J Street Glass. Where John Ryszka II spent time as both student and teacher . During that time period he also began building a small glass studio of his own where he could pursue his creative passion and further develop his skills with the medium at his leisure. His last two years with Neon Nightscapes he managed the company for a new owner, but after the birth of his first child John decided it was time switch gears and start his own business. He started Glass Phoenix and began developing his own line of glass products.

Today his work can be found in stores and galleries across the country. John is author of the book Visage of Glass, and has written tutorials for Glass Line Magazine.  He occasionally gives lessons in his private studio and for the past few years has taught summer workshops at Water Street Glassworks in Benton Harbor, MI.  John has continued his own education in glass by taking courses at the Mesa Art Center, and the Sonoran Glass Art Academy in Arizona.  Most recently, he studied in Rome and Murano, Italy.

John has won a few awards over the years as well.  His honors include many first and second place winnings in art festivals a cross the country, and placing second in the SGAA’s Flame Off in Tucson, AZ. 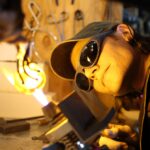