Join us for a presentation with torchworking artist JC Herrell followed by a meet-and-greet with beverages and light snacks with the artist and SGS staff. JC’s talk will cover the timeline of her work and her journey as a glass artist. This lecture precedes JC’s sold-out workshop The Joy of Stringer Control.

While working as a corporate trainer, JC began to teach herself lampworking in 2000. In January 2005, addicted to melting glass and having established the roots of her current business, she began making beads full time. The decision to dedicate her total energy to learning the craft and business of beadmaking allowed for a self-education revolution for JC who soon found additional energy from the advise and inspiration of her peers.

After exploring and learning to work enamels on lampwork beads, JC began teaching enamel workshops and classes in 2007. Her fondness for enamel was quickly surpassed by a desire to control stringer and create designs with fine, straight lines inspired by a long history of architectural interest. In 2010 JC began sharing her stringer skills in the form of workshops and the online tutorial project, “The Joy of Stringer”. JC currently works from a home studio on the Mendocino coast in northern California.

Metamorphosis: The Life Cycle of a Glass Bead, 2007 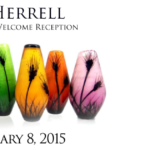